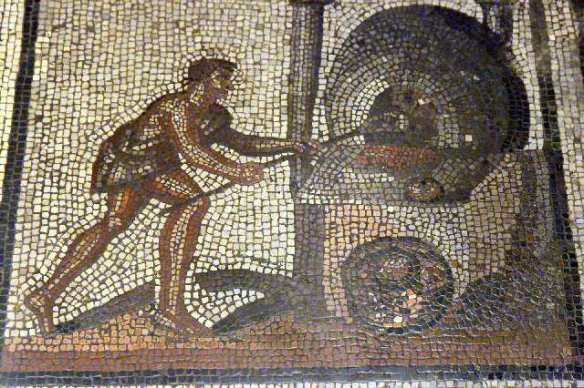 The goddess Fornax was in charge of preventing grain from burning in ovens. The festival of Fornacalia was held in her honor in early February, sometime around February 17. The grain was first dried in ovens before being ground in mills for flour. During the Fornacalia, a sacrifice was made in front of the oven, before families shared a communal meal with their neighbors in front of a communal hearth.

The mosaic above is part of a floor of 40 panels with scenes depicting the agricultural calendar. It was found in the archaeological site at Saint-Romain-en-Gal, France, and dates from the early 3rd century CE; it is now located in the Musée d’Archéologie Nationale in Saint-Gemain-en-Laye, just outside of Paris.