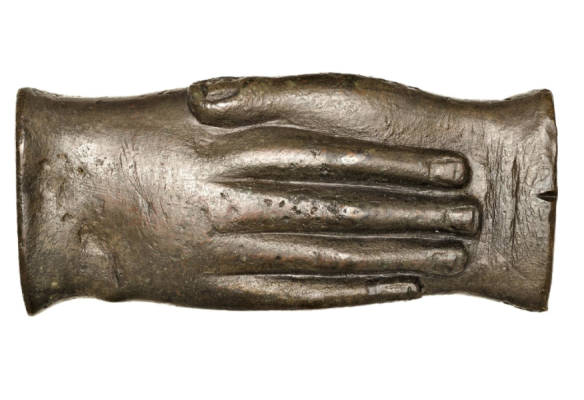 In Latin, the word for guest and host are the same: hospes, reflecting the idea that one should be an excellent host on principle, because one would surely be a guest before long. Reciprocity of this kind played an important role at a time when there were few amenities or services for those in transit, and traveling was a dangerous business. According to A Dictionary of Greek and Roman Antiquities, a connection of private hospitality to a Roman implied a bond more sacred than that which he owed his own blood relations, and required receiving a traveler in his home, offering him protection, and representing him in court, if need be. Once established, these relationships could go on over centuries. A traveler seeking to activate a mutual aid connection would present a hospitality tessera, like the one above, when arriving at someone’s home. This was something between an identity card and a token, to identify the traveler, who might be several generations removed from the host family’s original friend. Sometimes, the tessera was two pieces of a whole, that fit together like a jigsaw puzzle.

Think of a familiar story about strangers from another part of the ancient world: Lot greeted two angels visiting Sodom, offering them hospitality, including a feast and shelter in his home. When the men of Sodom surrounded Lot’s house and demanded that he hand his guests over to them, Lot pleaded, “I beg you, my brothers, do not act so wickedly. Behold, I have two daughters who have not known man; let me bring them out to you, and do to them as you please; only do nothing to these men, for they have come under the shelter of my roof.” — GENESIS 19:1-11.

This puts the occasional house visit (from in-laws, college friends and long-lost acquaintances from the Old Country) into perspective, no?