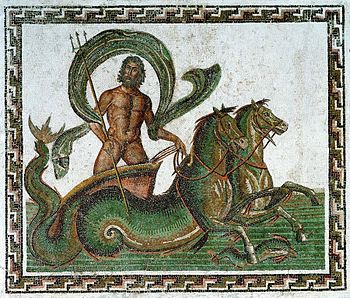 The management of water was critical in the heat of July, and was dependent on Neptune,   the Roman god of fresh water and the seas, who also protected drilling operations and wells. Neptune was identified with the Greek god Poseidon, and following the Greek tradition, his brothers were Jupiter and Pluto. He was often depicted with horses. A major festival, the Neptunalia, was held in his honor on July 23rd.  According to the 5th century writer Ambrosius Theodosius Macrobius, Neptune was one of only three deities to whom it was appropriate to sacrifice a bull. The other two were Apollo and Mars.