Coffins of Khnum-Nakht and Nakht-Ankh, photo courtesy of the Manchester Museum

Non-Fiction: The Bridge to Brilliance: How One Woman and One Community Are Inspiring the World — Nadia Lopez and Rebecca Paley

Productivity: The 12-Week Year: Get More Done in 12 Weeks Than Others Do in 12 Months — Brian Moran

Ancient Inspiration: “If you are distressed by anything external, the pain is not due to the thing itself, but to your estimate of it; and this you have the power to revoke at any moment.”

Delight: A Taste of Paris: A History of the Parisian Love Affair with Food — David Downie

Non-Fiction: So You Want to Talk About Race — Ijeoma Oluo

Strategy: How life Imitates Chess: Making the Right Moves, from the Board to the Boardroom— Garry Kasparov

Not so ancient inspiration: A cynical young person is almost the saddest sight to see, because it means that he or she has gone from knowing nothing to believing nothing.  — Maya Angelou

Fiction: You Know Who You Are — Ben Dolnick

Non-fiction: Churchill and Orwell: The Fight for Freedom — Thomas Ricks

Podcast: This Podcast Has Fleas — Koyalee Chanda and Adam Pelzman

“Patience is not very different from courage. It just takes longer.” — James Richardson

Music: What It Is: Funky Soul and Rare Grooves (1967-1977), from the Vaults of Atlantic, Atco and Warner Bros. Records. Various artists.

Comedy:  No Can Defend — Gary Gulman

Writing: The Forest for the Trees: an Editor’s Advice to Writers — Betsy Lerner

Essays: 100 Essays I Don’t Have Time To Write: on Umbrellas and Sword Fights, Parades and Dogs, Fire Alarms, Children and Theater — Sarah Ruhl

Not-So-Ancient Inspiration: “Nothing is so fatiguing as the eternal hanging on of an uncompleted task.” — William James

Memoir: I See You Made an Effort  — Annabelle Gurwitch

Ancient Inspiration: “If you’re irritable, man, train yourself to put up with abuse, and not get upset when you’re insulted.” Epictetus, Discourses.

Like a politician whose “views have evolved over the years,” my feelings about disco have undergone a transformation. The rallying cry of my adolescent cohort was DEATH BEFORE DISCO. Our obsession was hard driving, often British rock. A new release from Joe Jackson, Elvis Costello, the Police, the Clash, or the Talking Heads meant sitting on the floor for repeated listenings, immersing oneself in the record jacket (often black or florescent pink or green), memorizing the lyrics (often cynical), discovering who played bass (why on earth did I care who played bass?). We listened to this music as if our lives depended on it; we defended this music as if it were under attack. Other rock and pop —the Stones, Steely Dan, Linda Ronstadt— was practically in the water supply, and didn’t require one to actively seek it out or pledge allegiance to it.

But the soundtrack of the time, keeping everybody’s booty shaking, was the pulsating glitter of disco —tacky, vulgar and unavoidable since Saturday Night Fever, a movie whose preening, strutting misogyny made a deep and unwanted impression on me. 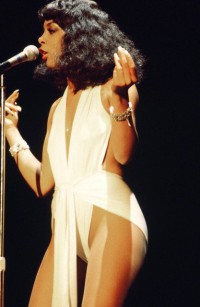 Donna Summer, in her heyday, dressed to moan

Many years, many pounds later: I have discovered that disco is an excellent motivator at the gym. Mind you, I don’t want to listen to it unless I’m suited up in lycra and strapped to a piece of equipment, when the mindless repetition of the music (Shake Shake Shake, More More More, Boogie Oogie Oogie) actually helps with the mindless repetition of the body on the machine, and drowns out whatever thumping techno yowling is currently pelting the gym. There is no better soundtrack to the skating machine than Keep It Coming, Love (KC and the Sunshine Band), Shake Your Groove Thing (Peaches and Herb), or More Than a Woman (the BeeGees), the very music I once disdained so strenuously. In fact, as tawdry as I found disco culture at the time, the music itself, and even the swaggering that surrounds it, retains an odd sweetness lo these many years later. The youthful bounce found especially at the intersection of disco and soul (e.g., Al Green, Barry White, Marvin Gaye, the Jackson 5) is very helpful when one has to kick one’s own ass around the gym. Here’s a great collection, if you need one. And check out To Disco, With Love, a kind of yearbook featuring all the ridiculous and over the top record jackets, recently published.

Welcome to my new outpost on the web! For its origin story, click here.

Lord Macaulay once said that Seneca the Younger was easily quotable, but reading him straight through would be like "dining on nothing but anchovy sauce."

I agree! Thus I present some of the condensed wit and wisdom of Seneca, every Saturday. Click here.