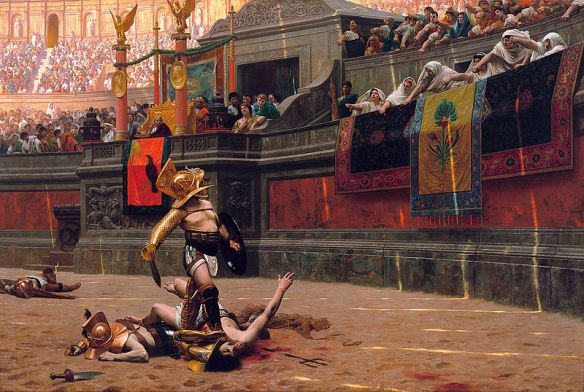 “Pollice Verso (with a turned thumb),” 1872 painting by Jean-Leon Gerome. In the Phoenix Art Museum. Photo from Wikimedia commons.

“Modern scholars have long pondered how civilized Romans could condone and even enjoy, make sport of, watching hundreds and even thousands of humans and animals being killed in elaborate public spectacles. Yet violence was omnipresent in Roman society and history. From animal sacrifice and slaughter to the disciplining of slaves and children to the brutalities of ancient warfare, the Romans had long grown accustomed to regarding creatures of lowly status, others and outsiders without reason or rights, as legitimate objects of violence.”

From Spectacles of Death in Ancient Rome, by Donald G. Kyle.